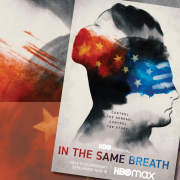 Go To Past Event
from Filmmaker Nanfu Wang: COVID Outbreaks and Outrages held on January 20, 2022

In her new documentary In the Same Breath, director Nanfu Wang recounts the origin and spread of the novel coronavirus from the earliest days of the outbreak in Wuhan to its rampage across the United States. In a deeply personal approach, Wang, who was born in China and now lives in the United States, explores the parallel campaigns of misinformation waged by leadership and the devastating impact on citizens of both countries. Emotional first-hand accounts and startling, on-the-ground footage weave a revelatory picture of cover-ups and misinformation while also highlighting the strength and resilience of the health-care workers, activists and family members who risked everything to communicate the truth.

Note: This is a discussion about the documentary; this is not a screening of the film. In the Same Breath is currently available on HBO Max.

Join us for an online conversation with Nanfu Wang.

About the Speaker
Nanfu Wang is an award-winning Chinese filmmaker based in the United States Her feature documentaries include Hooligan Sparrow (Sundance 2016), I Am Another You (SXSW 2017, Special Jury Prize winner), and One Child Nation (Sundance 2019, Grand Jury Prize Winner). Wang was awarded the 2020 MacArthur Genius Grant. She has received four Emmy nominations and was shortlisted for two Academy Awards for her films and is a recipient of the Independent Spirit Award, the Peabody Award, the George Polk Award, Cinema Eye Honor awards, and an IDA award.

In her films, Wang creates intimate character studies that examine the impact of authoritarian governance, corruption, and lack of accountability on the lives of individuals and the well-being of communities. With the rigor of an investigative journalist and immersive, emotionally powerful storytelling, Wang interrogates notions of responsibility and freedom, particularly amid the repressive state mandates in her native China. Originally from a remote village in China, Wang overcame poverty and a lack of access to formal education and eventually earned three Master’s degrees—from Shanghai University (M.A. in English Literature), Ohio University (M.A. in Media Studies), and New York University (M.A. in Documentary Filmmaking). She teaches cinematography and editing at New York University.

Director, In the Same Breath and One Child Nation

The leading national forum open to all for the impartial discussion of public issues important to the membership, community and nation. The Commonwealth Club of California is the nation's oldest and largest public affairs forum. Each year, we bring nearly 500 events on topics ranging across politics, culture, society and the economy to our members and the public, both in-person and via extensive online and on-air listenership and viewership.